The Benefits of Trunked Radio Systems

Many businesses and public-safety service organizations have adopted the use of radios for instant communications. This includes police departments, fire departments, ambulance companies, and more.

There are two main styles of radios designed for this purpose: the conventional system of two-way radios and trunking radios. Both conventional and trunked systems are very similar in terms of how they work, but only one can help improve the security and efficiency of communications during use.

Standard two-way radios do not have a central server/controller. The radios simply talk directly to each other, often with the help of repeater stations. With standard two-way units, anyone can switch over to a channel and participate in your conversation - whether you want them to or not.

Unlike conventional radios, trunked networks do not have user channel selection. Instead, a central system dynamically assigns channels to users by group. This is a more efficient use of the available spectrum, a simplification of the user experience, and an improvement in security.

With a trunked radio system, your communication is less likely to have cross-talk, adding a layer of security to a mission-critical part of your workforce.

A trunked radio system is a complex type of system that involves two-way radio, allowing the sharing of a few trunked radio frequency bands between a large number of users. Instead of assigning a radio channel to one particular organization at a time, users are instead assigned to a "talk group".

When any person in that group wishes to talk with another member in their talk group, the system automatically selects a channel that is vacant and the conversation takes place on that dedicated channel. Once a channel is no longer in use, it returns to the available pool to be assigned to other users.

This form of communication is a packet-switching computer network. Radios send data packets (voice messages) to a computer-controlled channel to request communications with a specific talk-group.

The controller then sends a signal to all radios linked to that talk group instructing them to automatically switch to the dedicated frequency indicated by the transmission. After the user is done speaking, all radios immediately return to the Control Channel to await further transmissions.

Through the use of trunking, radios can utilize the same sets of frequencies with less cross-talk, interruption, and errors. All messages must pass through a central computer for sorting and delivery. This method also allows for a greater volume of communications to pass through the same frequency bands. This is because as soon as a line clears, the system automatically begins to transmit the next message regardless of which talk group is active.

Since its release in 1997, and with advancements made to this technology, trunked-system users are now able to do far more in terms of securing their communications from misuse. Unlike conventional radio systems, a variety of trunking systems allow for voice encryption and the ability to lock out radios from talk groups and even entire networks. 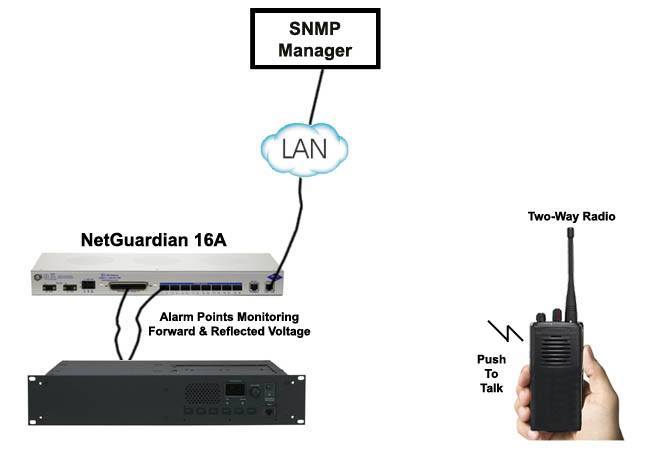 As you can see from the diagram above, through the use of an RTU with the proper capabilities, you too can effectively link your digital trunking system into your network monitoring system.

Advantages and disadvantages of Trunking Systems