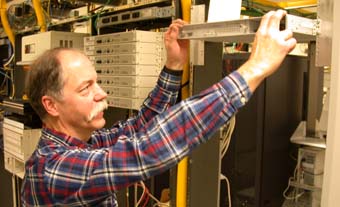 "Our network is powered from our hub sites and our battery backed up nodes," said Van Tuyl. "Independent of a commercial power failure, our network stays up. Our standard is the same five-nines availability of a traditional telephone company. We're a competitive provider, and we have to be a little better than the other guy."

"I had only one way to monitor the gensets remotely, and all it would tell me was that I had a catastrophic failure. In other words, if the commercial power failed, the generator didn't start, and I was in deep trouble - then I would get an alarm," said Van Tuyl.

The generators had great diagnostics … on control panel LEDs

The frustrating thing was, the gensets actually provided excellent diagnostics - and Van Tuyl could see them any time he wanted to drive out to the remote site and read the LEDs that were so conveniently located on the control panel.

"The gensets have a boatload of alarms. There's about 10 or 12 different LEDs, for things like low fuel, high temperature, low temperature, oil pressure, and all the other things you normally have an LED for," Van Tuyl said.

So Van Tuyl invented a creative solution to the problem - he would bring the LEDs to his NOC. Van Tuyl reasoned that all he needed to do was to convert the voltage on the light-emitting diode to a contact closure, and then transport the alarm to the central OSS on his SONET equipment.

Van Tuyl had come up with an ingenious idea, but now he needed to find a way to make it work, and his initial experiments were disappointing.

"I tried using reed relays, contacts, little transistor circuits, and various other things to bring those LEDs to my SONET equipment. It was loading up the circuit too much to do any good," Van Tuyl said.

Without any modifications, the Alarm Point Conditioner installed easily and works with both Van Tuyl's gensets and SONET gear.

"The Alarm Point Conditioner has been exactly the right tool for this application," Van Tuyl said. "The APC senses the voltage of the LED when it's not operated. When the LED operates, the APC sends an alarm to the SONET."

The Alarm Point Conditioner has also freed Van Tuyl's technicians for more useful work than inspecting generators. "Before the APC, I had to rotate people around to check fuel, to check temperatures. Now I don't have to depend on someone driving out there to check them," Van Tuyl said.

Without the Alarm Point Conditioner, Van Tuyl added, those conditions would not have been detected until the generators failed a start test, or possibly not until an actual power outage. "Getting the Alarm Point Conditioners has been the best money we've ever spent," said Van Tuyl. "What kind of price can you put on a genset that fails in an emergency? I've got millions' worth of equipment sitting out there, and I need to know the genset is going to support it if I need it. It gives me more faith in the reliability and the robustness of our system."

No matter what kind of equipment you need to monitor, DPS Telecom has a perfect fit solution for you. Whether you need small, versatile RTUs like the NetGuardian 216 ... large, full-function RTUs like the NetGuardian 832A ... or the complete T/Mon NOC Remote Alarm Monitoring System master station, DPS solutions are 100% guaranteed to work for you - or your money back.