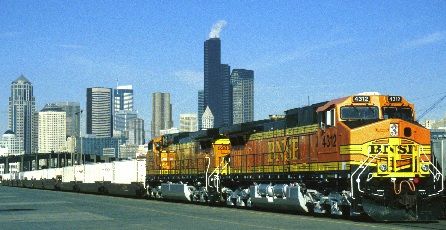 "We move information as well as moving trains," said Jim Gaynor, a network analyst in BNSF's technology services department. "The network primarily supports telecommunications for dispatchers. Dispatchers can access signals and switches along the track, and there are also direct telephone-mobile radio connections between the dispatchers and the train crews."

These telecommunications capabilities are essential for managing trains on the move. BNSF dispatchers can track the location of a train throughout its run and schedule runs to maximize the number of trains that can run on the track.

"We have several hundred trains running at any time," said Gaynor. "We run more than one train on some tracks, and we can do it because the dispatcher can direct trains onto sidings. It takes very close monitoring of times and speeds."

A Communications Network That Grew With the Railroad

The advances of communications technology have always been interlinked with railroads, and the growth of BNSF spans over 150 years of railroad and communications history. (Gaynor, a telecommunications veteran of over 30 years' experience, keeps a telegraph key in his office as a reminder of the early days.)

The Chicago, Burlington, and Quincy Railroad, one of the predecessor companies of BNSF, stayed ahead of the technological progress of its time: the printing telegraph (1910), train radio (1915), and centralized traffic control (1927).

A Strategy of Proactive Anticipation of Network Reliability Management Needs

Today, BNSF's fully modern telecommunications network is one of the largest in the nation, stretching from its easternmost point, Birmingham, Alabama, to the Pacific Coast. Technical progress keeps coming - BNSF is currently in the process of replacing its analog microwave radios with digital - and it's Gaynor's job to ensure that the network is supported by a top-quality network reliability management system.

"There's a lot more we want to do with network monitoring," said Gaynor. "The technology is constantly changing. It's hard to keep pace. That's why one of our rules is that, as far as technology goes, we don't buy more than we can install."

In BNSF's large, long-established network there is a dizzying variety of network reliability management equipment: AlphaMaxes, DPM 216s, KDA 864s and NetGuardians, all tied into two IAM-5s connected in a standby configuration by a protection switch. Additionally, there is some older legacy equipment and a Harris Communications NetBoss system to monitor the Digital Microwave radios and serve as the "Manager of Managers" or "MOM" with all other systems, including the IAM-5,feeding into it.

"A small office might only have six alarm points, so a small remote would cover it for right now. But you might want to put in a larger RTU with more capacity to handle the alarms you anticipate having in a year's time," said Gaynor.

Gaynor's future plans include eliminating his Badger masters in favor of mediating his Badger and Larse remotes to the IAM-5, relocating his secondary IAM-5 to Topeka for a geodiverse backup strategy, and forwarding alarms from the IAM-5 to NetBoss.

Over the course of his career, Gaynor's experience in adding new equipment to the network has given him considerable insight in evaluating network monitoring gear.

"My first concern is the technical capability - does it have the capacity and provide the proper functionality to do what we need. If we look at the budget first we're limiting ourselves. I look for reliability, ease of use and configuration, and also for equipment that can be used in a variety of environments for different applications," Gaynor said.

"For example, we're using the NetGuardians trackside to monitor switch gear and anything environmental, and we're also using the NetGuardian's terminal server capability to gain access to the craft port of the logic controller. In the Pacific Northwest we have a NetGuardian for every Control Point which could be within one or two miles of track," Gaynor said.

Gaynor said support is also important in evaluating vendors. "Customer support is an important issue. Being able to get tech support by e-mail is a real advantage - I'm often too busy to pick up a phone. But it's also good to be able to pick up a phone and get an answer really quick. My experience with DPS is that the tech support personnel on the phone either have the answer or if they don't, they will get in touch with an engineer and get you the answer quickly."

Gaynor has recently been working with DPS Telecom Technical Support to optimize the port configuration of his IAM-5 in anticipation of his future monitoring needs.

"I had one port of the IAM-5 configured for all my NetGuardians. And for the first dozen or so NetGuardians it was working great. Then we added some more, and the latency added up, and it started taking longer to poll all the units," Gaynor said. "I found out from Chris [Hower, of DPS Telecom's Technical Support Department] that we could have NetGuardians on multiple ports," Gaynor continued. "And in the future, I'm planning to have 120 NetGuardians, so it's good that we don't have those limits. So I'm putting 12 NetGuardians on a port, and we'll have 10 ports in all. So far, I've had good results in the field and the call center says the polling is very responsive."

Another way that Gaynor is maximizing the value of his network reliability management is through training. Gaynor attended the January DPS Telecom Factory Training Event, which he said was a valuable experience.

"I've been administering the IAM-5 system for years, but there's a lot I didn't know. At factory training I learned things I never knew - tips, tricks, configuration shortcuts. Nobody ever showed me this stuff before. As busy as I can be, every shortcut can help you."

Gaynor is passing his knowledge on to the monitoring staff at BNSF's call center, which is enabling better diagnosis and correction of equipment problems. "I learned some things I'm having the call center people use, like viewing site statistics to monitor specific sites and equipment, which helps us trace a series of alarms to the common cause. Before, we wouldn't be able to identify that," said Gaynor.

You Can Have the Security, Reliability, Versatility, and Quality Support of the NetGuardian 832A

The NetGuardian 832A has provide its worth in thousands of network monitoring deployments, protecting large, critical networks around the world. This versatile LAN-based unit provides all the tools you need for total site management - including LAN access to on-site equipment through a built-in terminal server.

Find out how the NetGuardian fits into your network - check out the full details now.