What Is SCADA Protocol And Communication Transport?

SCADA system operations rely on the real-time exchange of data between all its components. For this to be possible, there has to be a common communication mechanism in place (much like a language) that all your devices support. And it is also important to have some kind of channel where this communication exchange can safely happen.

We have many clients coming to us with questions about these topics. And we know that, without communication and communication channels, your SCADA system is useless. So, it's critical that you have a good grasp on the fundamentals of SCADA protocols and communication transport methods.

What is a Communication Protocol?

Your RTUs are pre-programmed to communicate with your master station and other devices through protocols. These protocols are designed to provide information about the status of all the input and output equipment in your remote sites.

As said previously, communication protocols are comparable to languages and they allow SCADA units to communicate with each other. Usually, network architectures are based on ISO (International Standards Organization) standard seven-layer OSI (Open Systems Interconnection) model. This is shown below: 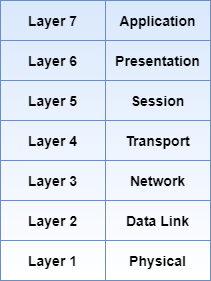 The bottom four layers will cover the physical wiring, network, and communication protocols of the local and wide-area networked, such as Ethernet and Frame Relay. The layers 6 and 7 usually deal with establishing and then terminating the session between the two devices - not all networks use these layers.

The Application layer is where a typical RTU protocol will provide the data at a SCADA workstation in a user format from the field RTUs.

The objective of the OSI model is to provide an established framework that will allow any network to connect and exchange signals, message packets, and addresses. This model allows communications to become independent of the devised system so you won't have to understand the complexity of the network.

A big part of any SCADA system design involves matching the protocol and communication parameters between connecting devices. There are multiple different protocols, which can be proprietary and non-proprietary.

The best practice nowadays is to avoid using proprietary protocols so you don't get locked up with only one particular vendor for future network needs.

The following are examples of modern protocols for SCADA systems:

This point-to-point protocol has become a standard for RTU communications in automation systems. Modbus is an application layer protocol and is based on the master/slave architecture. This means that one master station will control the data transmission with multiple slave devices that respond to the master's requests to read from or write data to the slaves.

In a standard Modbus serial network, there is one master and up to 247 slaves, each with a unique slave address.

Used especially in utilities such as electric and water companies, the Distributed Network Protocol (DNP3) is composed of three main layers: data link, transport, and application.

Based on the master/slave model, the DNP3 protocol is used between master stations and distributed RTUs. However, in this protocol, RTUs are able to send unsolicited (asynchronous) alerts - this means that as soon as a change of status happens, you will be notified. 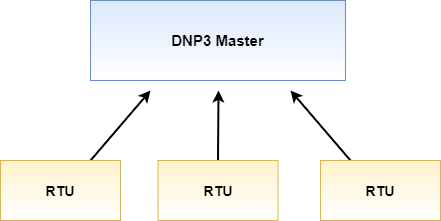 Simple Network Management Protocol (SNMP) is an application-layer protocol. Just like Modbus and DNP3, SNMP is based on the manager/slave architecture. The manager will collect and process data about devices on the network, and the slaves (or agents) are any type of device connected to this same network.

The SNMP architecture also has a third component: the Management Information Base (MIB). The MIB is much like a database for the SNMP agents. This means that when the manager asks the agent a question, the agents will use the MIB to provide an answer. 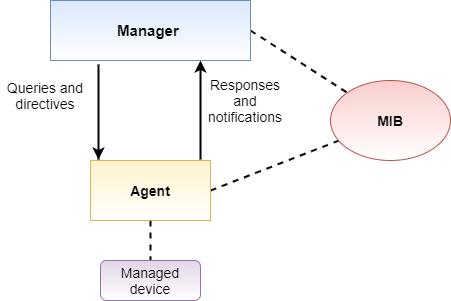 What is a Communication Transport?

SCADA protocols need some sort of transmission channel to be able to travel between devices - these are called communication (or data) transports.

Nowadays, a SCADA system can be built around a combination of many different communication transmission methods. However, many companies can't simply choose which type of transport they will use. They have to use whatever method is currently available at their remote sites.

Nevertheless, it's important to know the most common types of communication transports and how they work.

In the telecommunications world, there are two kinds of transport networks - circuit-switched and packet-switched networks.

The circuit-switched network establishes a direct connection between two or more stations via switches, which is usually done with telephone dial-up modem networks. On the other hand, in packet-switched networks, data is routed in the best possible route in the (private or public) wide or local area network. Packet-switched networks are more cost-effective since a dedicated network is not needed from start to finish.

Telecommunications companies switch, combine, amplify and transmit information over communication transports. The following are a few of the current networks that may be used for remote SCADA transmissions from remote and local area nodes in wired or wireless networks.

Frame relay is packet-switched transport. The data packets of frame relay networks may not be directly related to the size of SCADA poll/response packets. Therefore, a SCADA packet will usually be broken up into many frame relay packets by the network, which delays between the frame relay data packets.

Typically, this type of packet switching is used when transporting large data through large geographical distances. This is because this transport is a data communication service provided by telecom carriers across a network with one or more points.

The costs associated with the frame relay transport are based on three factors: committed information rates, access circuit, and port speed.

Ethernet is one of the first Local Area Networks (LAN) introduced in the early 1970s.

This transport arrived as a big change in the way computing is carried out. Instead of using terminals to access a shared mainframe or minicomputer, the user now works directly at a single user computer. The computer, in turn, is connected to a local network giving the user shared access to information stored and to common networked equipment, such as printers or fax machines.

This leads to changes in wide-area networking. LAN to LAN connectivity is being used instead of the terminal to computer - resulting in requirements for higher speed of communication.

Ethernet is also a packet-oriented protocol. Its packets are generated without regard to the incoming data protocols. Ethernet-enabled devices need to follow protocol rules, which are tied to the needs of the Ethernet. This allows a variety of devices to be connected to an Ethernet network similar to frame relay.

TCP/IP networks have the same packet characteristics of frame relay and Ethernet networks. There is no relationship between the IP packets and the incoming SCADA poll/response data packets.

TCP is a protocol developed in the late 1970s in order to provide interoperability among several equipment vendors. Unlike OSI, TCP/IP is not a truly international standard, but an open standard that is widely used internationally.

IP addressing is based on the concept of hosts and networks.

A host is basically anything on the network that is capable of receiving and transmitting IP packets on the network, such as an RTU. Keep in mind that this is different than a server - servers and client workstations are all IP hosts.

The hosts are connected together by one or more networks. The IP address of any host consists of its network address plus its own host address on the network. IP addressing uses one address for both network and host addresses. How much of the address is used for the network portion and how much for the host portion varies from network to network.

The Internet is a somewhat new technology that can leverage remote access solutions. Many SCADA vendors allow you to have your monitoring devices connected to the Internet and in this way to your terminal of choice. It allows you to be connected to your SCADA network without actually being in your office.

Besides the Internet, there are many different types of wireless networks. These include:

For broader distances, you will require some type of public network. The most common method is dial-up over cellular.

How to Overcome SCADA Design Challenges

As we've seen, there are multiple options to choose from when it comes to protocols and transports. Because of that, it's important to keep in mind current and upcoming technologies in a cost-effective manner. In this sense, if you have older/legacy devices, the best practice is to maintain these devices but upgrade gradually.

In order to do that, you need a multiprotocol master station. They will be able to receive and send information from all your RTUs independently of which protocol they support.

When choosing your multiprotocol master, it's important to review the following aspects:

As a trusted remote monitoring solutions provider, we know how important a SCADA system can be when it comes to providing system reliability. That's why we make it our goal to provide efficient RTUs and a multiprotocol master station. 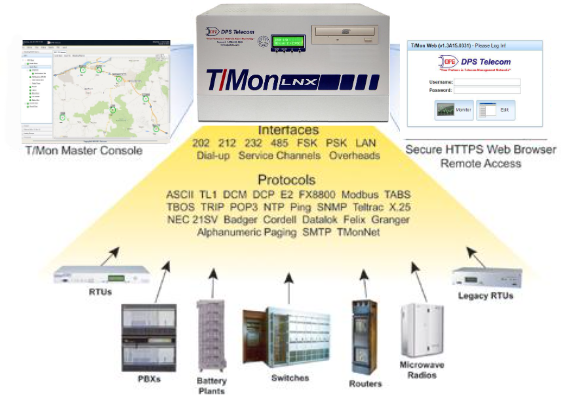 Our T/Mon master follows all the industry best practices in terms of functionality, protocols, hardware, and software. Also, if you have specific requirements that an off-the-shelf product can't properly meet, remember that we are able to custom design the T/Mon (and any other of our products) to fit your specific needs.

To know more about the T/Mon or any other SCADA solution, simply send us a message - our team of experts will be happy to chat with you.