As populations grew and telecommunications networks began to experience larger loads of traffic, a method for standardizing data transfer was needed. In the European region, a system based off of the T-Carrier system in North America was derived. This became known as the E-Carrier System, or E1 System.

The system of cabling in an E1 network definition is relatively simple. Allowing for many conversations to be carried over a single line, E1 lines were created to promote reliability and efficiency within the telecom industry while avoiding excessive network redundancy.

Using a method known as multiplexing, E-Carrier networks allow for up to 32 conversations to be carried over a single line. Through data packet switching and encoded transmission cues, pieces of data are sent across the network and reassembled at the other end before the receiver is able to hear them.

An E1 link operates over two separate sets of wires, usually Unshielded twisted pair (balanced cable) or using coaxial (unbalanced cable). A peak signal is encoded with pulses using a method avoiding long periods without polarity changes. These pulses are further divided into 32 timeslots which are further broken down to 8 bits each. Each time-slot sends and receives a PCM (Pulse Code Modulation) chunk to digitally represent sampled analog signals.

This form of data-transfer allows for a rate of flow useful in voice-over and telecom applications.

While this method has been recognized by CEPT as an international standard, usage in the US, Canada, and Japan still remains low due to the high volume of data transfer over the similar networks running on the older T-carrier technology.

In many countries around the world, telecommunications tasks are increasingly being handled across a communications-standard that is known as the E-Carrier System.

Similar to the T-Carrier networks found in North America, the E-Carrier differences are rather small but significant. Performing the same tasks over a network that is essentially the same, the difference lies in the encoding and data-transfer methods.

While data transfered across a T1 connection arrives "in-band" with control information and data packets are sent at along the same path, Controls and transmissions are carried concurrently in an "out-of-band" method. This allows for the "urgent" Control coding to be processed by the receiving device in order to determine what information is following on the other line, as opposed to having to demultiplex the data packets like with T1 networks.

Equipment designed to work for E1 networks must be capable of sending and receiving data in this way. By sending alarm monitoring information over an E1 link, you circumvent the need for an expansive LAN while maintaining a relatively fast connection rate.

Is E1 easier or harder to manage than other data transport channels?

E1 must be remotely monitored. One challenge that is common with E1 (and its close cousin T1) is a lack of IP/LAN. Any site where E1 is the primary transport channel is probably a very remote outside-plant facility.

Since most telecom equipment assumes the availability of LAN, providing it can be difficult at such a remote location. You used to need an expensive "LAN card" from your transport manufacturer. There are now alternate solutions. Let's take a look at one of the better ones, which has been a clever and versatile innovation for telcos worldwide:

A new solution for monitoring and LAN mediation: An E1-native Remote Telemetry Unit

Recently, new developments in remote monitoring technology have made it much easier for you to work with outside-plant transport. Versions of this technology have been developed for T1, Fiber, and E1.

Its easy to install - here's how the system works:

As you can see, this single device is capable of performing multiple functions. It's a remote monitoring RTU, so it collects alarm data and can issue control commands at your facility. It's an E1-to-LAN mediator, so it can communicate back to your central office using the available transport. It's also an E1-to-LAN mediator to other devices via its onboard switch, so all of your other critical gear can access your network

This new development in monitoring technology has directly reduced your potential cost for deployment. Installing one box is always faster and cheaper than installing three. There's also a reduction operational expenses.

A single integrated RTU will be supported by the manufacturer. If you try to piece together the same functions with multiple devices, there's no manual and no tech support. Most of the time, each of your vendors will end up blaming the others.

Where have E1-native Remote Telemetry Units been deployed?

T1 is the common standard in the United States, so RTUs that support E1 are deployed in other countries that have standardized on E1. The Philippines is home to one example, where the national power company has deployed NetGuardian 832A RTUs specially equipped to handle E1. 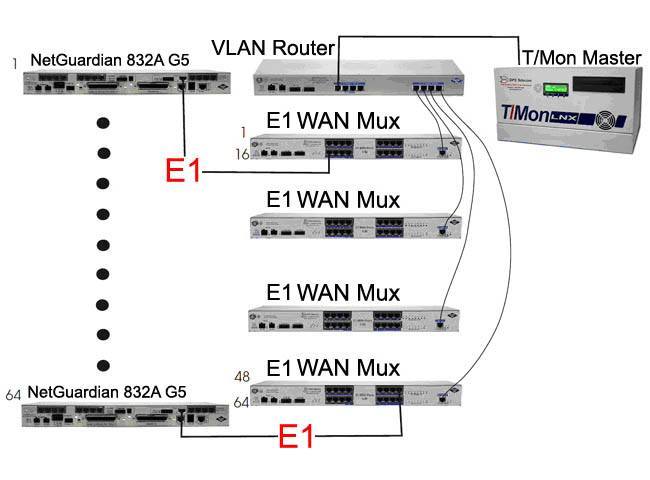 Although the first NetGuardian shipped to NGCP for testing was just a 125 VDC build of the 832A, the final design also featured E1-capable RTU's reporting back to a T/Mon master station via E1 WAN Muxes and VLAN Routers.

National Grid Corporation of the Philippines (NGCP) rolled out a system built from E1-equipped NetGuardian remotes, E1 WAN muxes, VLAN routers, and a T/Mon master station. This single system took over for a much more complicated assortment of disconnected systems. That kind of efficiency boost is a great help for protecting revenues and cutting costs (the two sides of your bottom-line profits). Full E1 case study...

Critical to their success in this project was working with a manufacturer ("DPS Telecom") who could develop a perfect-fit solution. This helped during all phases of the project: