E1 RTUs: Send alarm data via WAN and deliver LAN to the site

If you've found yourself on this page, it's probably safe to assume that you already know the difference between terms such as RTU or SCADA. If you would like more information on these two subjects, please check out these links:

For those of you interested in monitoring remote sites, you already know an RTU is a necessary piece of equipment to monitor and control alarms and relays, but did you know that they can do much more than that?

As populations grew and telecommunications networks began to experience larger loads of traffic, a method for standardizing data transfer was needed. In the European region, a system based off of the T-Carrier system in North America was derived. This became known as the E-Carrier System, or E1 System.
E1 RTUs are a specially equipped device that functions basically the same as a standard RTU, but with the added abilities to extend LAN to devices at sites where a direct LAN connection are unavailable. By using E1 (or T1) networks to connect to the internet, these RTUs are able to tie into your LAN using the internet as a proxy. This provides a transport channel for the RTU's alarm data, but it also offers another benefit.

These RTUs can also typically extend a LAN to several other devices as well. Functioning as a LAN transport card, these pieces of gear allow for data transfer to extended devices while also performing the same monitoring and control duties you would expect from a piece of equipment such as this. 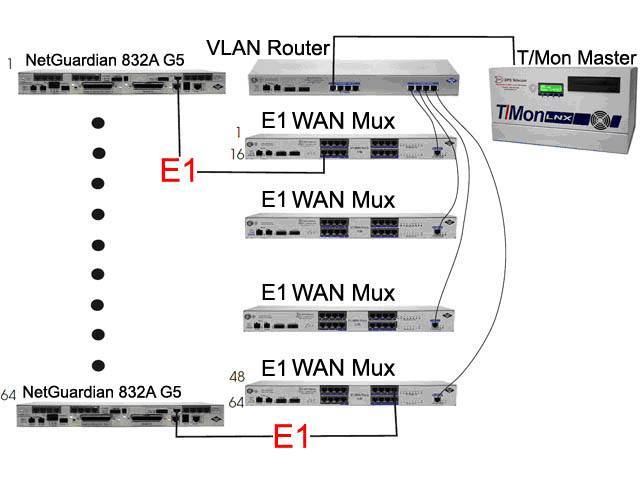 An example showing E1 RTUs reporting back to a central master station via E1 WAN muxes.