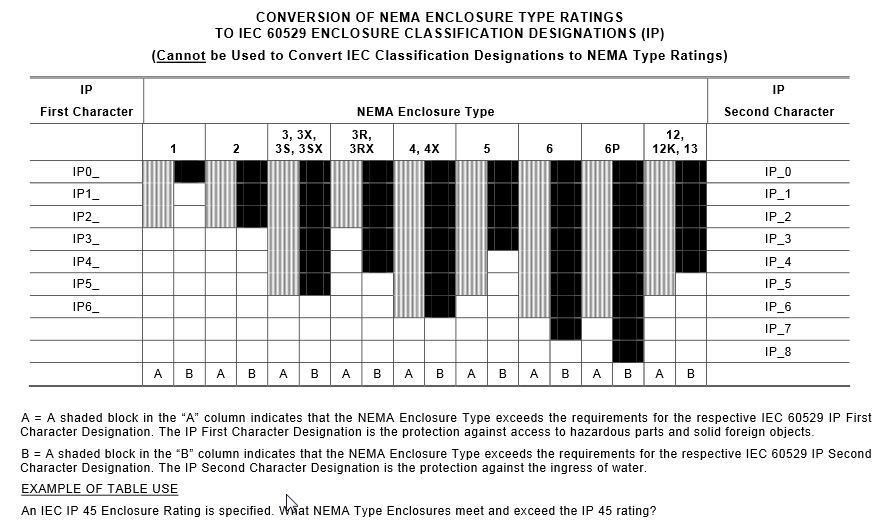 This table demonstrates the NEMA ratings and their equivalect IEC IP codes.


What Is a NEMA Enclosure?

NEMA stands for National Electrical Manufacturers Association. The association came up with a system of ratings to differentiate between the protective capabilities of storage and junction boxes for electronic equipment. These are typically known as NEMA Ratings. Similar to the IEC IP codes, NEMA Ratings are intended to create a simple standard for all enclosures for electronic devices.

With electronic devices in a wide range of environmental settings, ratings can vary quite a bit. At the most basic level, enclosures are rated to protect against dust and light. At more robust ratings, enclosures can protect against corrosive liquids, being fully submerged in water, and even explosions.

A full list of NEMA enclosure types is available here.


Why Do I Need a NEMA Enclosure?

Simply put, NEMA cabinets, cases, boxes, racks, or enclosures protect your electronic equipment from damage. In order to ensure that no gear is damaged and no outages are experienced, many companies began to manufacture protective cases. In order to make it easier to compare the relative strengths and tolerances of various equipment, a standard of measurement called NEMA Ratings came to be. Also, keep in mind that NEMA Ratings do not describe the size or shape of the case.

The National Electronics Manufacturers Association came up with a system of ratings. These are typically known as NEMA Ratings. Similar to the IEC IP codes, NEMA Ratings are intended to create a simple standard for all enclosures for electronic equipment.

You probably have multiple pieces of sensitive electronic equipment that are critical to your operations as well as devices that monitor that equipment. These devices can be susceptible to environmental factors such as water, circulating dust, lint fibers, and shock, even if you think they're safe inside a server room.

In order to protect valuable equipment as well as personnel, many devices are housed inside of protective cabinets. With manufacturing tolerances varying from company to company, several standards of measurement have been implemented over the years. Let's take a look at a few different types of NEMA enclosures that are most common in the power utility and telecommunications industries.

Type 1 NEMA enclosures are rated as the lowest protection level of the NEMA standard. Providing some level of dust resistance or light water splashing, these cases are typically used as storage lockers. They're also used as equipment housings and preventative safety measures.

While these protective housings are built to a common standard, they do not provide protection against many dangers. Equipment inside is vulnerable to corrosion, dust, oil, water, or extreme conditions.

NEMA Type 3R enclosures are designed to offer protection to equipment and personnel in a wide variety of environments. Enclosures built to this standard are intended for conditions that are more extreme than Type 1 cases.

While these protective housings are built to a common standard, they do not provide protection against corrosion, dust, oil, pressurized water, or extreme conditions.

Type 4 and 4X NEMA cases are intended for use in a variety of situations. With builds designed for indoor or outdoor applications, they provide a durable security measure against damaged equipment as well as protection for personnel against dangerous gear.

NEMA 12, as well as 12K, rated enclosures are intended to be used in indoor industrial applications. Used as a general purpose storage or equipment enclosure, these units are designed to withstand a whole range of conditions that could effectively render electronics useless.

Technicians and equipment operators know that in order to efficiently provide the services needed to run a business, their safety as well as that of their electronic equipment must be ensured no matter what conditions they may operate in. Contact DPS Telecom if you need information on NEMA enclosures we offer with our units.