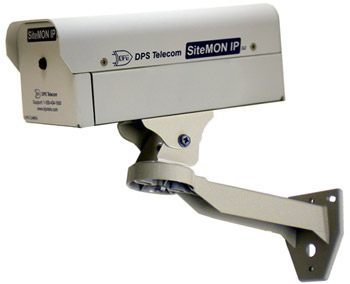 With this camera and RTU in one, you don't need to wonder what's going on at your sites. The new SiteMON enables you to make security decisions remotely, allowing you to dispatch on-call staff, security, or even police.

While sitting at the NOC one fine afternoon, good ole Joe Technician was watching sitting at his computer when an alarm popped up alerting him to movement detected at a secure remote site. With the incorporation of motion detectors into his Building Access System (BAS), he was able to determine that something, or rather someone, had broken into his unit and was currently stealing expensive telecom equipment. His alarms however, had failed to let him know that it was a person, so he dismissed the movement alarm as a possible bird that had gotten inside again when someone was working at the site. It wasn't until he started watching equipment going offline one piece after the other. By the time he was able to arrive onsite to see why he was experiencing such an unusual failure, the theif had gotten away with costly equipment that left Joe experiencing one of the most catastrophic network outages he had ever experienced.

Don't be like Joe. If you have important equipment to protect, be sure to incorporate security cameras into your remote site monitoring systems.

With advanced controls that allow you to pan and tilt the camera for a wider field-of-view, automatic motion-detection abilities, and the ability to watch the live-feed from around the world (using web interfaces), security cameras such as the one above are a sure-fire way to let you know exactly what is happening to your equipment. If it had been a bird, Joe could've seen it and dismissed it, but since he was blind to the intruder, he was caught unprepared. The ability to remotely witness the intruder and alert authorities could've saved him the incredibly expensive headache he now has to deal with.