Read the first part of this story.

With T/Mon and the NetGuardian already in place, Baldwin can integrate the Building Access System at an incremental price, associated with the necessary keypads and ECUs. And with the NetGuardian's expandable capabilities, a single unit can support up to 6 building access systems. Baldwin uses the BAS to control multiple outbuildings, some as far as 300-450 ft away from a host NetGuardian. 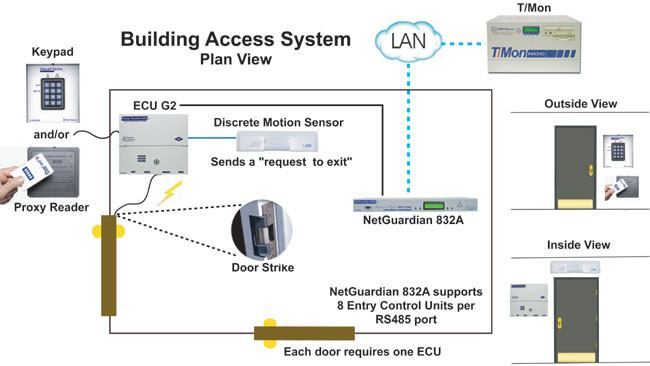 The DPS Building Access System will monitor and control access to your remote sites. This example is similar to the system deployed by Dickey Rural.

BAS User Profiles allow for customized access across the network

Baldwin makes full use of the system's capacity to create over 1,000 user-profiles and codes. The system lets Baldwin easily keep track of every external and internal user. These codes can be customized to restrict users to specific locations and times. For enhanced security, BAS allows administrators to even drill down to sections within sites, individual doors, days of weeks, and time of day.

"Internal employees have their own codes and access to almost everywhere," said Baldwin. "But it's the delivery people, carpenters, and outside vendors that only need access to a specific location for a specific period of time." The system makes it easy to dispose of codes and profiles, so that making changes doesn't leave Baldwin with his guard down.

Baldwin's most utilized feature of the Building Access System is the "stay open" mode. This application temporarily overrides the door strike for a specific time frame. It helps avoid nuisance alarms from multiple re-entries, while still keeping login history.

Baldwin uses the "stay open" mode as a discrete alarm input for his Building Access System. He uses it at up to 4 major locations, primarily those that shouldn't be frequented often and require a keypad for entry. If the stay-open mode is activated or left on during hours of non-operation, notification is sent out immediately via email, pager, etc.

With all of these features, building security can be left unmanned until necessary. "If [a building] is left in "stay open" mode after hours, it will let us know and we can close it from home or wherever," said Baldwin.

"I would be really uncomfortable not having the visibility that we have today..."


To stay ahead of network problems, Dickey Rural monitors "everything"

He makes full use of the system's alarm monitoring capacities for optimal network monitoring solutions. "The whole concept is to see little things before they can become big things," said Baldwin.

Baldwin's fleet of NetGuardians monitor doors, temperature, and even generators. Derived alarms keep him informed when the systems undergo routine testing and everyday monitoring of his backup generators. "The newer ones have an alarm point that tells us that the generator is running, the load is transferred, and it's happening because a test is in progress," said Baldwin.

"Since switching to the T/Mon NOC, it's been error free,"


Ping alarms warn when links go down - before customers report the problem...

With their extensive wireless services, network downtime is a critical hazard to their operations. Ping alarms constantly monitor for broken connections, giving Baldwin quick notification as soon as one is down. Baldwin used this feature on the NetGuardian to consistently monitor remote equipment that delivers the Internet to customers via IP links. 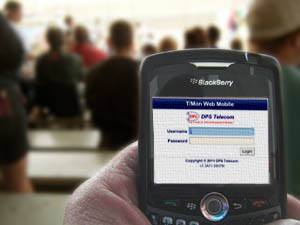 With rapid notification with the NetGuardian, Baldwin is able to respond quickly while minimizing downtime. "If the link goes down, we'd know it usually before we get a customer report," said Baldwin. "It gives us a heads-up to get it fixed."

Tech support is "very helpful" in the rare event of trouble

Since his implementation of T/Mon NOC, Baldwin has seen fewer network threats. "Since switching to the T/Mon NOC, it's been error free," said Baldwin.

When a trouble does arise, DPS tech support is behind him every step of the way. "Everything's positive," said Baldwin. "They're very helpful when we have trouble, which has been rare".

With better control over his network, Baldwin is able to protect his unmanned remote sites. Baldwin knows that early, detailed alarm notifications mean less customer churn and downtime. "I would be really uncomfortable not having the visibility that we have today," said Baldwin.


(The Trademark iPhone® is owned by Apple Inc.)

(The Trademark BlackBerry® is owned by Research in Motion Limited.)

A high-quality building access system will enhance the security of your sites.

This guide to will show you how to ensure the safety of your revenue-generating equipment. 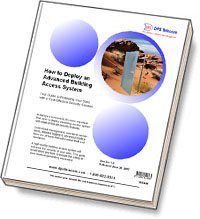