To keep public radios up and running, he needs to have visibility over every remote site. Since no network is exactly the same, this means that he needs to work with a remote monitoring company capable of providing custom solutions.


"After setting a NetGuardian RTU up, I thought 'Wow! that's the way to go."


"I had the good fortune of discovering DPS through a previous coworker, in a marine fire and safety project," Dan recalls. "They used DPS devices in all of their projects. After being exposed to that and setting a NetGuardian RTU up, I thought 'Wow! That's the way to go.' Now we've added them to every system that I maintain."

One of Dan's responsibilities is to maintaining a repeater system on national VTAC channels. "In the VTAC system, all the repeater systems are all the same frequencies and tones," Dan explained. "So, obviously, if they're all on at the same time, it's a big mess."


"We use the NetGuardian 16 and we have a telephone dial-in, and also an over-the-air DTMF control."


To achieve better control over this system, Dan and DPS Telecom worked together. "We use the NetGuardian 16 and we have a telephone dial-in, and also an over-the-air DTMF control," he said. "So you can remotely turn the repeater on and off. And the counties themselves can do that from dispatch centers, or whatever they need."

Another way to know what's happening on the repeater system is to get notifications from the NetGuardian RTU. "All the local dispatch centers in the coverage area can call up and turn it on or off if they need to," Dan described. "And when it enables or disables, it calls my phone and tells me, so I know somebody is messing with it." 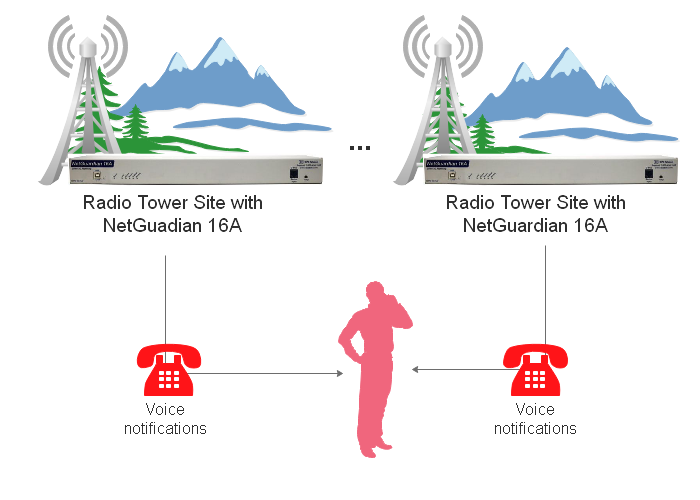 RTUs That Can Endure Harsh Conditions are Crucial for Public Safety

After deploying RTUs, Dan is notified immediately of any problems at county radio sites - so he can react quickly before radio service goes down. "Yeah, it's critical," he said. "Five or six years ago, we had a real winter at one of our sites. There was snow and ice, and power went down, so the generator came on. Pretty soon, the air intakes to the buildings got snowed over and the generator stopped. The NetGuardian called me and told me 'The site is down', so I had time while things were running on batteries to go up there and deal with it."


"If I didn't have that, I wouldn't know when the site went down... So, yeah, monitoring is critical."


RTUs that can withstand harsh conditions and remain operational is vital when dealing with public safety radios. "If I didn't have that, I wouldn't know when the site went down," he explained. "You know, that's a hub site for three counties and lots of people would be off the air. So, yeah, monitoring is critical."


RTUs Ensure That The Right People Go To The Right Site

Remote monitoring systems aren't helpful only during major events though. Most of their job is to make sure daily maintenance is taken care of, so companies can avoid windshield time. "In routine stuff, you can essentially see your sites without driving to them," Dan said. "So, if you have a problem, you can narrow it down quite a lot before you take off driving."


"I can remote into some of the equipment, but the only one that calls me to tell me what's going wrong is the NetGuardian."


Know where to go is the first step to be prepared to correct any issues. "You have to know which site has the problem, especially at multi-site systems where a problem at any site can cause a problem at all of the sites," Dan explained. "And it helps that you actually know where you need to go - you can see equipment that sends alarms at each site."

Having proactive remote monitoring equipment sending automatic and detailed alarm notifications ensures that Dan knows what's actually happening at every county's remote sites. "I can remote into some of the equipment," Dan says, "But the only one that calls me to tell me what's going wrong is the NetGuardian."

An introduction to Monitoring Fundamentals strictly from the prospective of telecom network alarm management.