Moundridge Telephone Got Better Visibility With One Solution

In early 2010, Richards wanted to get voice alarm notifications for one of his sites, but there weren't many solutions available at the time beside a small, voice alarm reporting remote with minimal inputs. So Richards came up with his own fix: he bought a NetGuardian E16 to work with a second, separate voice-reporting alarm remote to send voice alerts to his phone. "We had the NetGuardian E16's relays setup to activate alarm inputs on the [voice reporting alarm remote]."

"You know, there's only 4 alarm inputs on the [voice reporting alarm remote]," Richards says of the old setup. The voice alarm reporting device, with its 4 alarms, could only provide a single major and minor alarm each for the site's AFC and Metaswitch, which just wasn't enough. Richards wanted greater visibility at his site while still being able to receive voice alarm notifications. 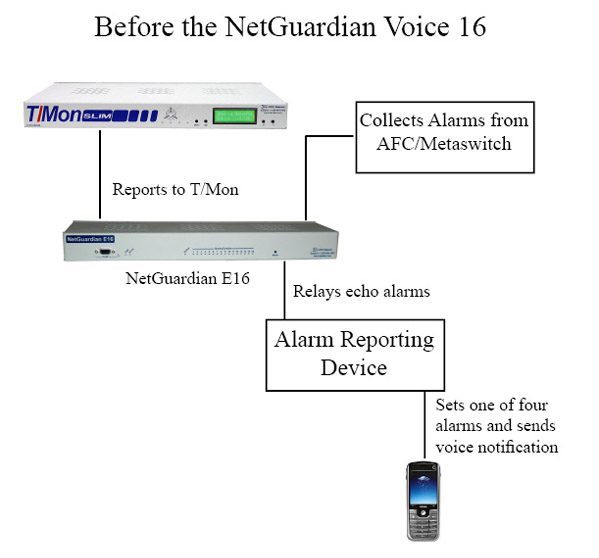 "Now that this system is developed, rather than going through the hassle of using the E16 to activate the [voice dialer remote], DPS swapped me out for the V16."

So he came back to DPS to see if there was a product that could provide more detailed alerts for site alarms and still provide voice notifications. After Richards had purchased the E16, DPS Telecom had developed the NetGuardian Voice 16, which boasted18 controls, 16 discrete alarms, and provided custom voice notification.

The NetGuardian Voice 16 could collect and report all of its own alarms, both via voice notification for Richards and it also via SNMP back Moundridge's master. This eliminated the need for a separate voice alert remote and offered superior alarm detail. It was perfect for him.

"We've put in a T/Mon SLIM to do SNMP from the Metaswitch and send our alarms to a cellphone."

"Now that this system is developed, rather than going through the hassle of using the E16 to activate the [voice dialer remote], they swapped me out for the V16." Because the E16 didn't quite fit his bill, DPS Telecom swapped Richards' E16 for a new NetGuardian Voice 16 free of charge. 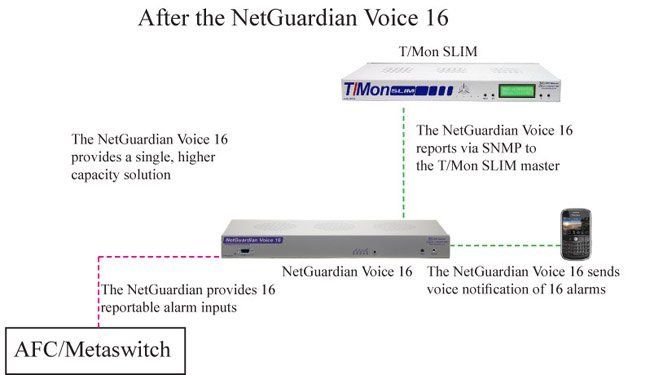 The Voice 16 provides greater visibility and voice notifications, all in a single solution RTU.

"Oh, DPS is great to deal with. I haven't had any trouble with DPS from the word 'go.'"

Managing the Network with Alarm Notifications by Phone

Richards and his team at Moundridge were receiving alarm notifications from their NOC via pagers. "We want to do away with the pagers and go straight to cell phones." So they've upgraded their T/Mon DL, which they had in service, collecting and providing notification of alarms for a decade, with a new model from DPS. "We've put in a T/Mon SLIM to do SNMP from the Metaswitch and send our alarms to a cellphone."

"We want to pick up email by phone," he says, and with the T/Mon SLIM, Richards and team can finally ditch the pagers and receive emailed alarm notifications on smartphones. Emails sent by T/Mon even provide a link that the user can click (or in the case of smartphones, touch) to acknowledge the alarm, so none of Moundridge's techs are ever out of the loop or unreachable.

Richards has been a long-time client of DPS Telecom and knows the products well. About his experiences with DPS Telecom, Richards was quite happy. "Oh, DPS is great to deal with," he said. "I haven't had any trouble with DPS from the word 'go.'"