While several U.S companies in the rail industry have not yet fully implemented Positive Train Control (PTC) technology, it remains certain that they will shortly.

First mandated by the federal government in the Rail Safety Improvement Act of 2008, the deadline for full PTC implementation looms (December 31, 2018 and various delayed deadlines). Installation of equipment has been accomplished on all Class I railroads, and 91% of route-miles have fully implemented PTC. Testing and activation remain on just 9% of Class 1 railroads.

What about track and equipment failure? SCADA and remote monitoring systems can cover this critical function for smooth railway operation to help those railroads that have implemented PTC, as well as those who are in process of updates.

The fact that many railroads have already successfully implemented PTC may sound like it's time for rail companies to brush the dust off each other's shoulders and bask in a job well done, but it's not quite over yet.

Class II and III railroads not subject to the original mandate will need to update their systems, if they haven't already, to run as tenants on a Class I rail network.

Further regulations will eventually impose additional requirements, extending coverage mandates to smaller tracks. Even railroads who have already achieved full implementation have more work left to do, including ongoing maintenance.

Even with the partial defrayment offered by grant programs, each railroad that will implement PTC technology does so at a loss.

While PTC prevents regulatory penalties and accidents, it doesn't increase revenue or cut costs. Even accidents were already covered by insurance. And, railroads, so far, have primarily lost money on PTC. Smaller railroads have felt a larger impact as well.

That's obviously not good. Whether or not they run on time, trains run on money. So railroad companies are tasked with finding strategic ways to leverage their new PTC capabilities to either increase revenue or cut costs.

Understanding PTC as a SCADA System

To see how companies can implement PTC effectively, we'll need to peel back a few layers. Just like a rose by any other name is still a flower, PTC is just one variant form of a SCADA system. SCADA stands for "Supervisory Control and Data Acquisition", and that's exactly what this technology is designed to do, too.

With PTC controllers installed in each locomotive and waypoint unit, and radio towers built or leased along each branch of track, railroads now have a way to acquire vast amounts of real-time data. That's the "data acquisition" part.

The "supervisory control" aspect of SCADA is the reason PTC was mandated in the first place: it's the ability to physically manipulate objects from a distance.

Namely, it allows automatic systems or dispatchers to control trains from a central location.

Operating as a Central Command

Specifically, using PTC/SCADA, a central command will stop trains that are behaving dangerously, as they might prior to a crash.

Commuter railroads, for example, will be better able to prevent train-to-train collisions with PTC equipment.

How does the system know to exert supervisory control? Data acquisition. 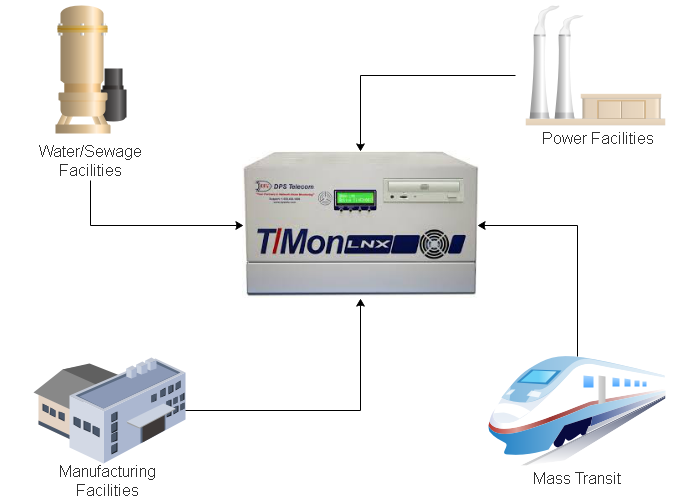 As you can see here, central monitoring principles from a range of industries can be leveraged to comply with PTC requirements, cut costs, and support revenue service.

Traveling over speed, through the wrong signal, into closed maintenance areas, or toward another oncoming train will each cause an alert to be transmitted from the locomotive or waypoint unit. Here's an example of how this can work:

There are, however, two other major causes of rail accidents as well: track and equipment failure. PTC, as mandated, doesn't address these issues. But SCADA can.

In most industries, SCADA is used to improve maintenance results and system reliability. The primary technology required is the ability to transmit real-time data from remote locations. This allows maintenance managers to diagnose problems as they arise, but before they cause equipment failure.

Maintenance managers then can react by dispatching workers, with the proper equipment, to fix emerging issues before they cause harm. Doing so improves on scheduled maintenance, which is based on average historical failure rates, not current equipment needs.

Monitoring equipment and track for maintenance needs also will improve rail reliability, as it prevents unexpected slowdowns or shutdowns. It also informs dispatchers of unsafe conditions beyond those specifically required by PTC.

For instance, waypoint sensors will detect track temperature, which will inform dispatch to lower speeds or reroute due to ice or metal-softening heat.

With the SCADA technology in place already, rail companies can continue to expand the range of inputs they monitor for unsafe track, equipment, and operating conditions.

Implementing PTC technology takes foresight and partnerships. Seeing the potential of the technology, beyond a simple regulatory burden, allows rail companies to turn the mandated cost into a tangible benefit.

Partnering with a PTC vendor that is well versed in SCADA and remote monitoring technology and its powerful potential will help railroads build a successful future.

DPS Telecom has been a leading provider of remote monitoring and SCADA for decades. To take advantage of our expertise, get a quote today!